The FORD FALCON GTHO PHASE III was ranked 8th in the Sunday Herald Sun’s list of the Top 20 Cars from Down Under, compiled by motoring expert Paul Gover.

Paul Gover concludes his three-part series looking at the best and worst cars ever on the roads. Today, he gives us his list of Australia’s 20 best cars of all time. 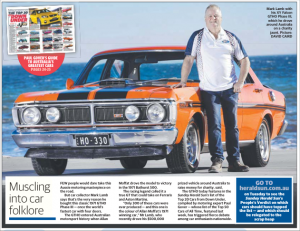 Few people would dare take this Aussie motoring masterpiece on the road.

The GTHO entered Australian motorsport history when Allan Moffat drove the model to victory in the 1971 Bathurst 500.

The racing legend called it a true GT that could take on Ferraris and Aston Martins.

“Only 300 of these cars were ever produced — and this one is the colour of Allan Moffat’s 1971 winning car,” Mr Lamb, who recently drove his $500,000 prized vehicle around Australia to raise money for charity, said.

Top 20 Australian cars of all time 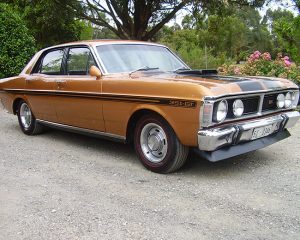 Icon. Legend. $1 million superstar. That’s the Phase 3, rightly regarded as the high-water mark in Australian V8 muscle cars. It won at Bathurst, helped create the legend of Allan Moffat and was, for a time, the fastest four-door car anywhere in the world.

With Ford Australia set to close its doors in 2016, the … END_OF_DOCUMENT_TOKEN_TO_BE_REPLACED