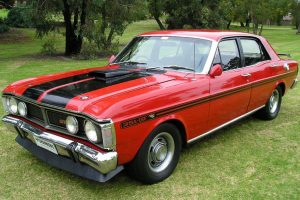 Looking suitably aggressive8 with its air intake protruding through the bonnet and bold side stripes, the XY GT’s were affectionately known as “Shakers” to many people, a nickname derived from the shaking action of the bonnet scoop and particularly noticeable while the engine is idling.

It is also the vehicle that most people associate with the term Falcon GT. The XY GT was the model that has most captured the imagination of the masses and it is the one that is most often copied.

Many people have purchased standard XY Falcons or Fairmonts and dressed them up to imitate the most legendary of all Falcon GT’s.

With Ford Australia set to close its doors in 2016, the … END_OF_DOCUMENT_TOKEN_TO_BE_REPLACED